I think the most significant part of our 3-day weekend in Mexico city was learning that God is so far-reaching, so wise and intelligent, so loving, that he is in charge of it all…even seemingly unrelated Anthropological details.

You see, Mary came to visit Mexico in the 1500’s (much like Moses and Elijah came to the Holy Land during New Testament times at the Transfiguration). God sent Mary with a message to build a Christian church in a particular location. That church replaced a place of child sacrifices and saved thousands and thousands of lives.

Mary talked to a native guy, not one of the Spanish Conquistadors who conquered the various native groups in Mexico. This guy, who had an Aztec name, but I can only remember his Spanish name, Juan Diego, took Mary’s message to the Spanish bishop of Mexico City.

Now imagine an African slave in the Southern United States going to the local white minister and telling him that Mary asked him to tell the minister to build a church. Imagine the reception that slave would get. It was similar for Juan Diego. The native people got no respect. They were not treated with worth.

Native people in Spanish-conquered Mexico were encouraged to convert to Christianity. The Spanish Conquest, after all, was commissioned with the purpose of evangelizing the Americas. (Though they did so, it looks like they did it more for material gain.) The conquerors did not allow the native people to hold office, to study for the priesthood, or hold any such position of leadership. They were second class citizens.

The bishop, as you’d expect, did not believe Juan Diego. He said he’d need a sign if he was to believe.

So Mary visited Juan Diego on the mountain again. It was December and she gave him Castilian roses (the bishop’s home region of Spain). Juan Diego carried the roses in his tilma, a poncho-like cloak made from cactus fibers. When he let the roses fall from his tilma in front of the bishop, there was an image of Mary on the cloak, just as she’d appeared to Juan Diego.

Scientists say it’s a miracle, that there are no brush strokes, but that the pigments appear to have landed on the tilma much as color is placed in modern photographs.

But that’s not the biggest miracle to me.

Mary had a message from God in that image, and it’s very complex in how it shows the integration of Aztec and Biblical symbols. The list of images and symbols found on the Mary picture on the tilma is very long. Here’s a photograph my husband took of the tilma last week: 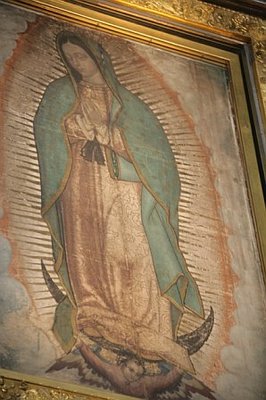 It’s hard to tell from our photo, but there are stars all over the picture. What’s neat is that the stars match the constellations that would have been seen from Mexico City that December in the 1500’s. The stars date the tilma’s image and Mary’s appearance, accurately pinpointing the time her message came. The message was that God knows his people and loves them, exactly where (and when) they are, and for who they are.

The message was also one to the native people. You see, there are many Aztec symbols to be found in this picture. See those damask-looking designs in Mary’s dress? They contain symbols from Aztec religions. One example is this flower design, a symbol of the Aztec sun god. (Below is the interior of a building in Teotihuaca, with the original designs and original paint from when Aztecs occupied the city.) 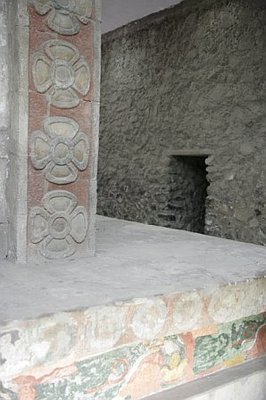 What the message conveys is that Mary’s Son is the God of the Sun. In fact, if you look closely, you’ll see that symbol on Mary’s womb.

The image also has Mary with a black ribbon below her chest but above her womb. That’s what pregnant women in the Aztec culture wore to let the community know they were expecting. Mary is dressed as Juan Diego’s people dressed, identifying with the native people. That alone sends a wonderful message to both conquerors and conquered!

Upon very close study, you can also see symbols of both the New and Old Testaments. And the symbols of the three ships in Christopher Columbus’ crossing: the Nina, the Pinta and the Santa Maria (guess who those were named after!? The christ child and Mary).

I love how this miraculous image of Mary tells the native people that they count. It tells them that God honors their search for him. They created false gods, but they were searching for the one True God…he is affirming their search and completing it by introducing his son, through the Mother of his son.

The Aztec sun god had a mother who the Aztecs worshipped. She heralded his coming. So it is utterly appropriate that Mary showed the Aztecs the way to her son. Just as she tells us in the New Testament, “Do as he tells you.”

And here’s my favorite aspect of the whole miraculous thing…

The bishop repented of his disdain of Juan Diego and all the Native people.

Yes. He repented, and started to treat them as people of worth. And he was the spiritual head of the city, and thereby modeled how the conquerors should treat the conquered.

Our God is the God of reconciliation, and both sets of people gained common ground through this.

Knowing the pain of my mom’s native country and how people have had to heal from Nazi occupation, I understand just how valuable it is that God sent Mary as a messenger to heal ALL the inhabitants of the land of Mexico.

To the Natives, Mary says, “Thank you for searching. Let me show you who you were searching for.”

And to the conquerors, she says, “These are your brothers and sisters. I love them too. God loves them. They are your equals.”

My husband and I were talking on the flight home from Mexico City. We know that Christianity has been criticized for taking pagan holiday dates and replacing them with Christian celebrations. But we think this makes so much sense, Anthropologically. Who cares the date or what the weather is like during celebrations? What counts is that God wants us to celebrate. And what counts is celebrating Jesus’ birth and resurrection. Christianity was smart…rather than leaving a hole in people’s original calendar, they filled that hole with the goodness of Jesus. God meets people where they are, he completes them and fills their needs.

Much the same say, Mary showed how Jesus completed the Aztec search for powerful deities.

God is the God of Anthropology! He loves people for who they are, where they are. Amen.

The author and Midori and Frodo
Follow KristineKohut.net on WordPress.com